Every year we receive donations from the members of clubs and associations as well as individuals who wish to show their appreciation for the work that we do and thus enable us to continue our voluntary work.

Not being able to organise her usual fund-raising fiesta, Pauline and her faithful team of helpers have been undeterred. They have held a raffle which has raised money for our association of voluntary interpreters as well as the Asociación Esperanza, which offers invaluable support for women with breast cancer. Here's a link to their facebook page: www.facebook.com/aesperanzacm/ .  Many thanks, as usual, to Pauline and her team for the generous donation of 550€. Oh, the hats? ... it was Royal Ascot Ladies' Day!

Maureen's husband, Geoff, sadly passed away in December 2020 after a long illness during which, as many of the interpreters will remember, he maintained a positive attitude and a cheerful disposition. Friends and family of Geoff made donations totalling €500 for our association. We thank them all for their generosity and extend to Maureen our most sincere condolences. 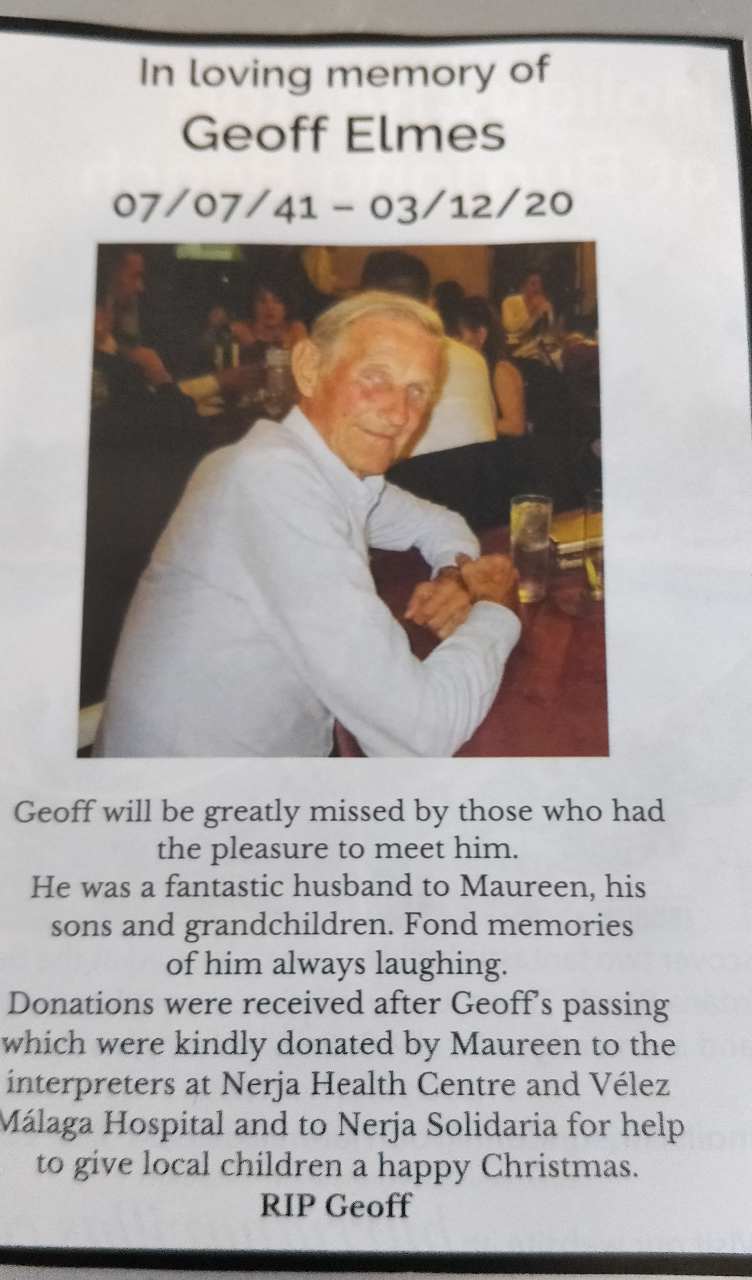 The Phoenix Club in Torre del Mar donates 750€ to AVISA

We are most grateful once again to receive such a generous donation for which we thank all the members of the PHOENIX CLUB.
We were sad to hear of the death of their chairman, Ken, who will be sadly missed by all those who knew him.

PAULINE KENNEDY DOES IT YET AGAIN

For the fourth year running, Pauline has organised a fund raising event for our benefit. This year she and her helpers have raised the staggering amount of 2635 euros for our association. The event, held in Nerja on January 12, was a total success - good food, brilliant entertainment and excellent company. Everyone clearly had a fantastic time. Many thanks to Pauline for her efforts on behalf of all the interpreters, as well as all the people who benefit from our voluntary service. Thanks also to all her helpers, the entartainers and all those who attended the event. 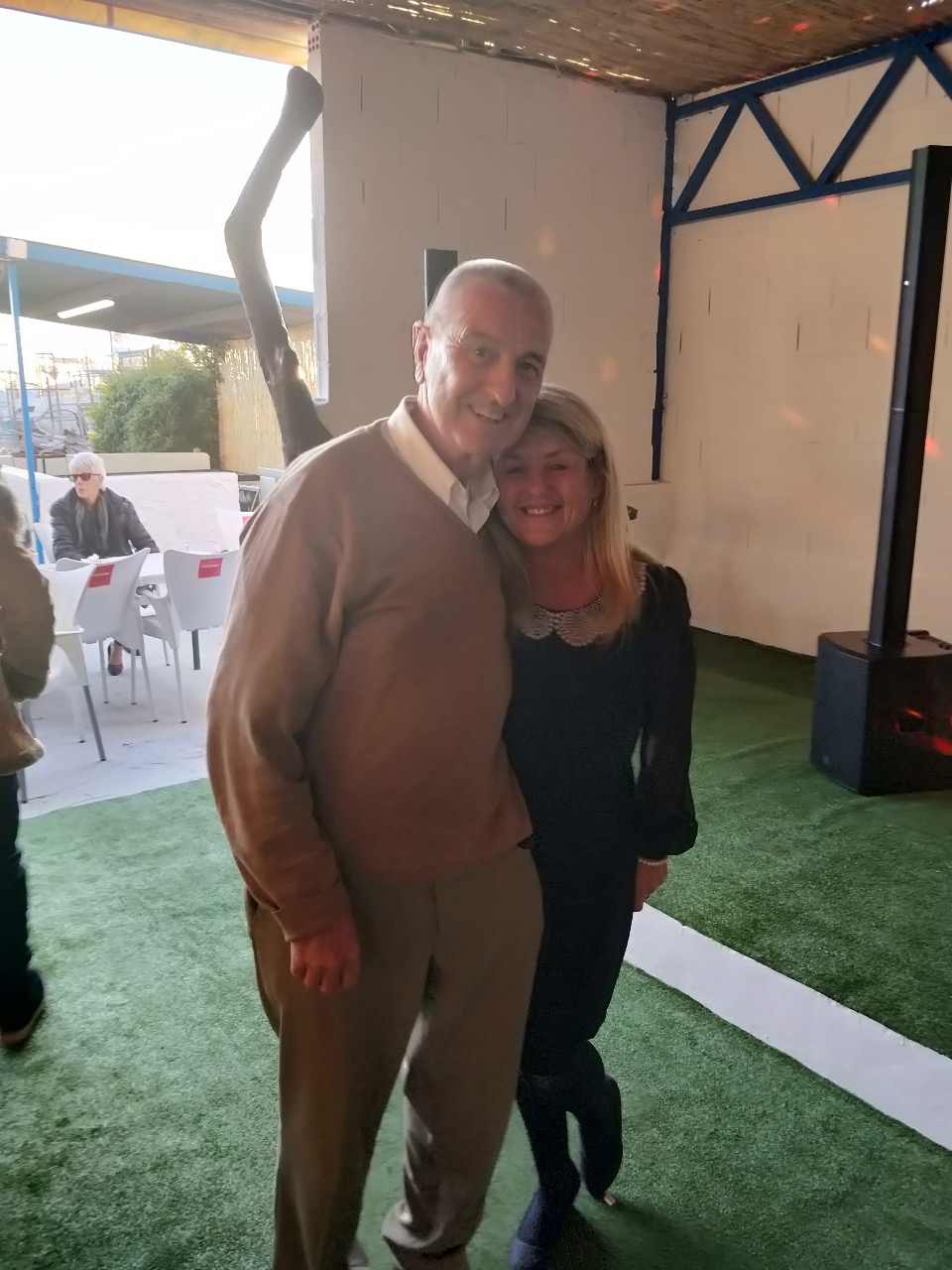 DONATION FROM THE PHOENIX SOCIAL CLUB 2018

A big thank you to all members of the Phoenix Club www.phoenixsocialclub.co.uk in Torre del Mar for their most generous donation of 1,000 euros. 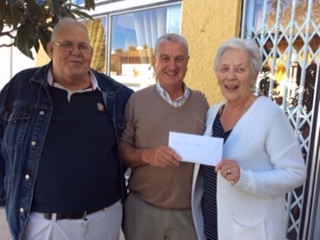 Once again Pauline has organised a fund raising event among the residents of Nerja on behalf of AVISA, (the association of voluntary health interpreters in the Axarquia). The event was a great success, with excellnte live music and food. We all had an absolutely brilliant time. Pauline (and her team of helpers) raised an amazing amount of 1,890 euros. This money will be used to cover our administrative costs and to make a contribution to the travel expenses of all the 32 voluntary interpreters. Once again we express our thanks to Pauline and her team for helping to support a service which many foreigners, both tourists and residents, are so grateful for. 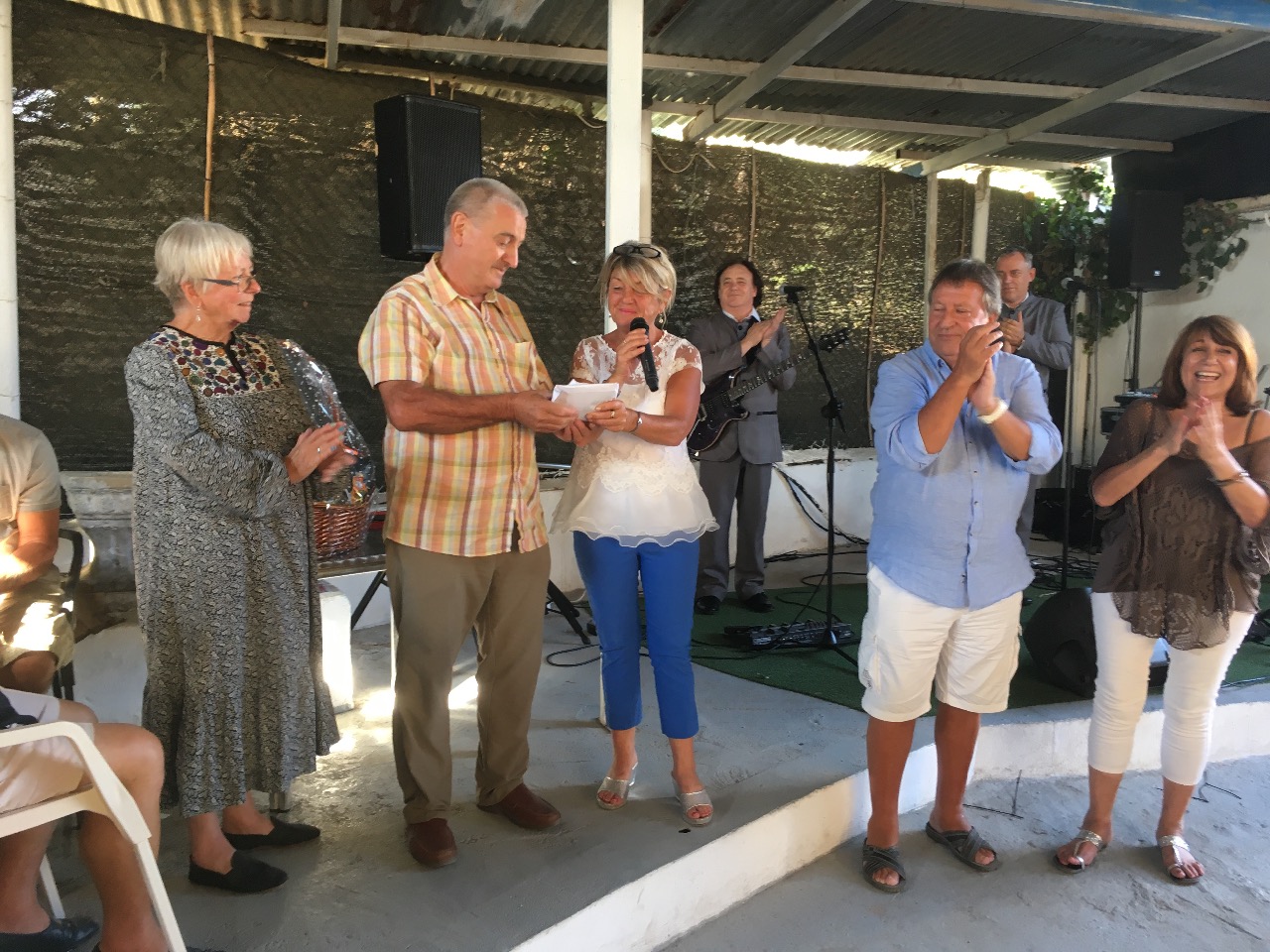 DONATION FROM THE PHOENIX SOCIAL CLUB 2017

Mant thanks to all the members of the Phoenix Soical Club www.phoenixsocialclub.co.uk for their generosity once again, and especially to John and Jenny Day for having organised the event which raised the 500 euros. 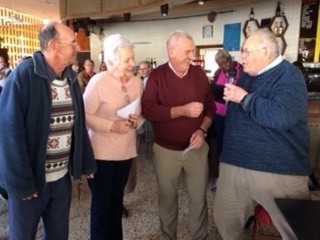 DONATION FROM THE PHOENIX CLUB 2016

Once again we express our grateful appreciation to all the members of The Phoenix Club  www.phoenixsocialclub.co.uk

for their generous donation of 500€ and especially to all those who organise the fund raising which enables associations such as ours to function. 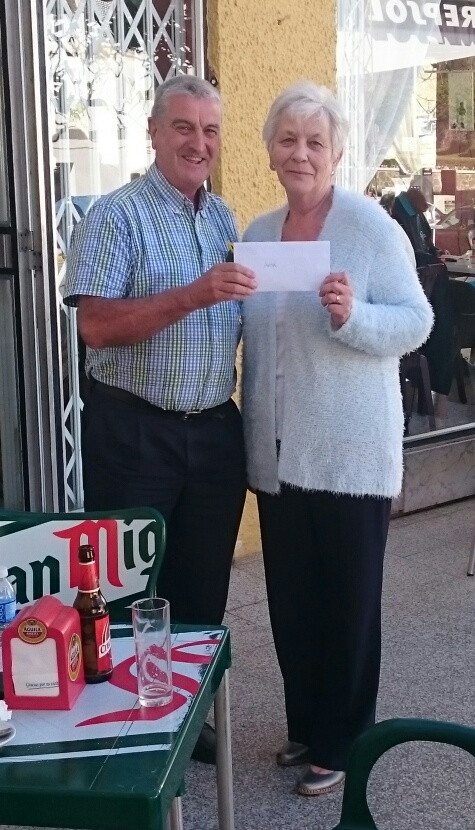 This year Pauline has organised yet another event with live music so as to raise funds for AVISA. Last year she donated a very generouse amount (see below) but this year she has really surpassed herself - raising a total of 2,100 euros! Some 180 people attended - most of them British, and we all thoroughly enjoyed the live performances by The Jersey Boys and the delightful Jordana. This is the poster for the event:  Pauline.pdf (877,7 kB)

Here we would like to repeat our most sincere thanks to Pauline and her team of helpers who worked so hard to achieve such a generous donation and, of course, all those who attended. 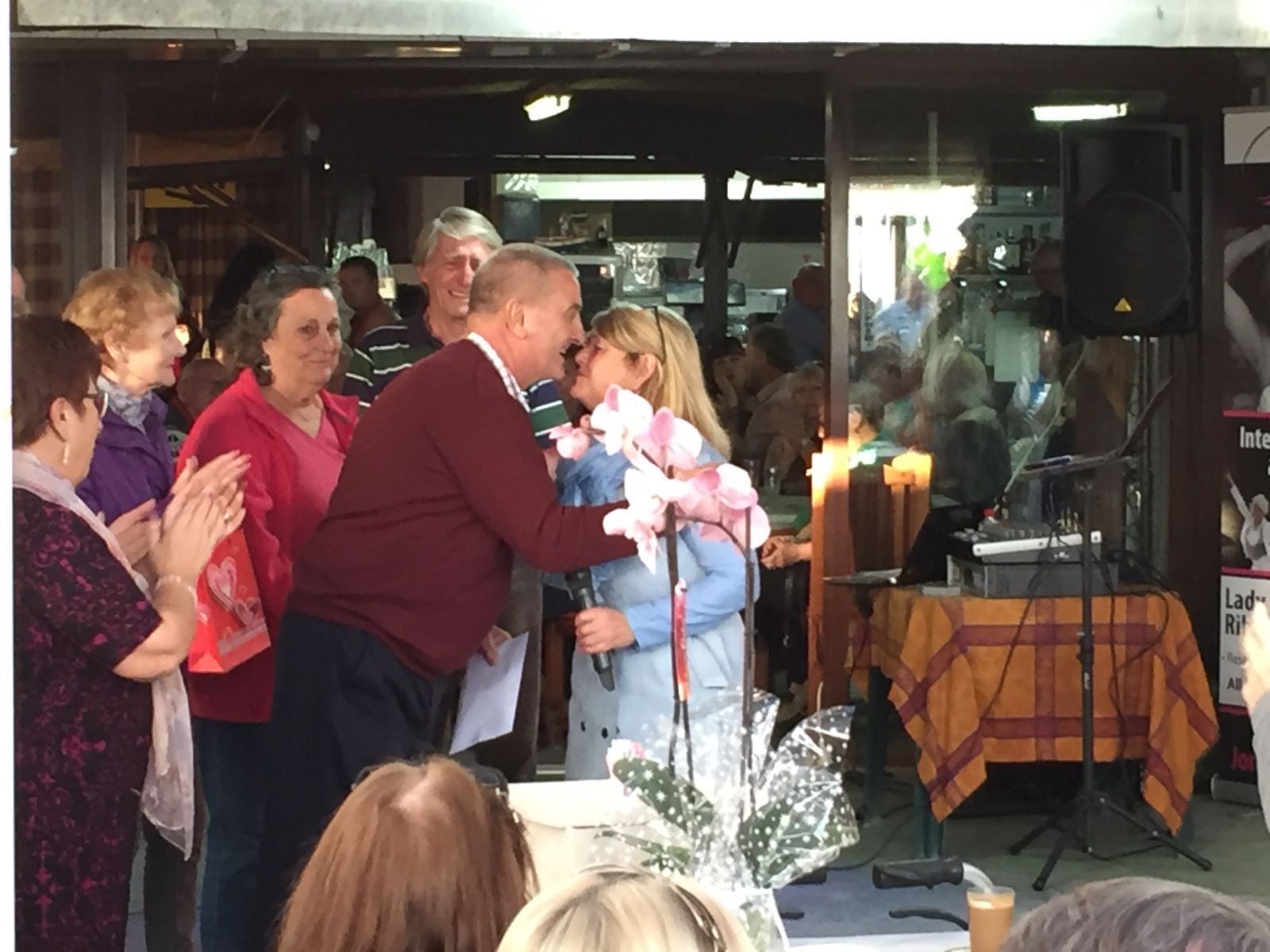 DONATION FROM THE PHOENIX CLUB 2015

We express our sincere thanks, once again, to the PHOENIX CLUB www.phoenixsocialclub.co.uk for their generosity .(€500)

Thanks to all the members of the Lake Viñuela Social Club for their generous donation of 275 euros that they presented to us in March 2015
En la foto, Marjorie Morgan presenta la donación a los voluntarios: Sheilah, Elianne y Gregorio. 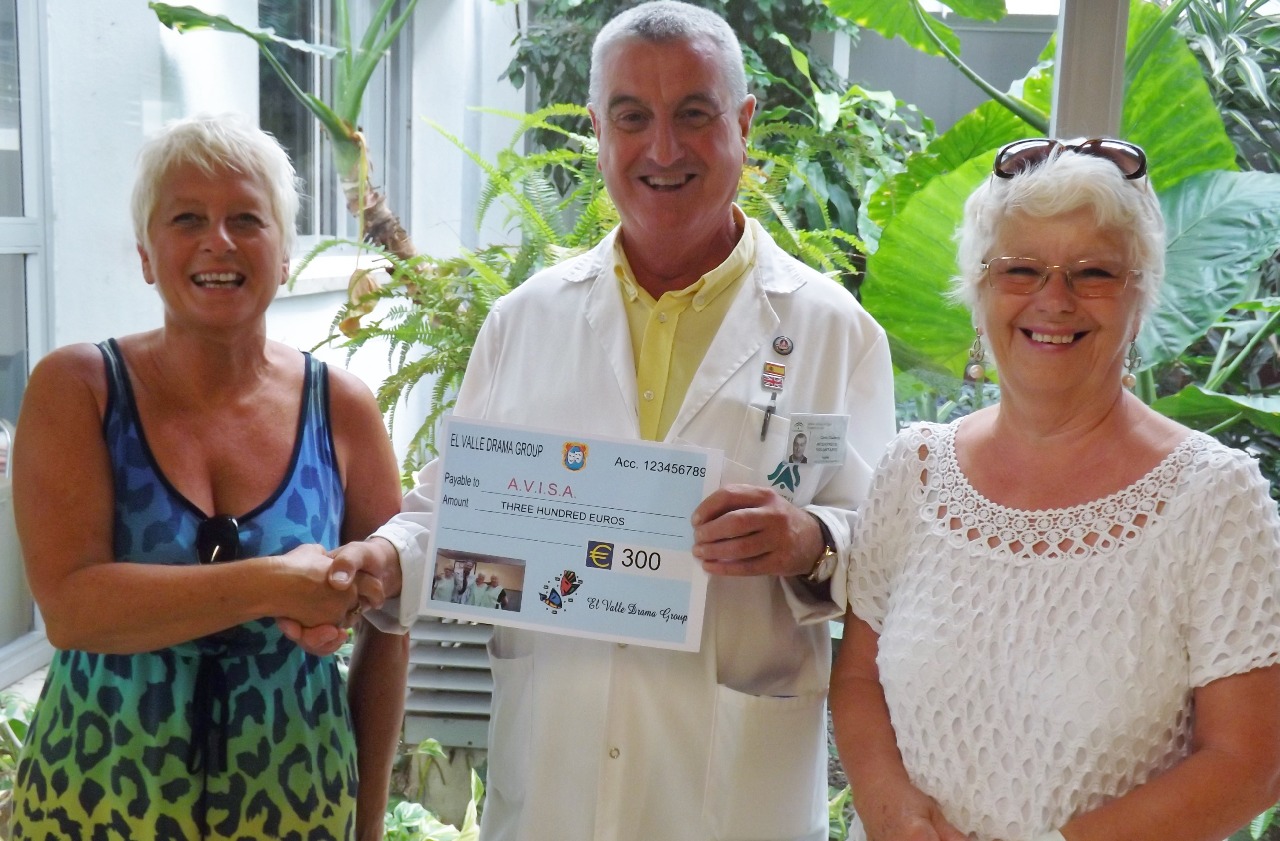 Many thanks to all at the El Valle Drama Group for their hard work and generosity. Apologies for having kept them waiting prior to them handing over the donation, but it was a busy working day at the hospital.
The Drama Group is intending to have a Pantomime at the end of November. If you feel that you would like to get involved on stage or behind the scenes please contact Brian Turner at mucktub63@hotmail.com or  951 066 079
In 2014 we received very generous donations from the Phoenix Club in Torre del Mar www.phoenixsocialclub.co.uk and from the Trapiche Social Club.
Our sincere thanks to all those people who have been involved in fund-raising for us over the past years.

In December 2014 we received an impressive donation (€1247) from Pauline Kennedy who, together with a group of friends, organised an evening of soul music in Nerja to raise funds for AVISA. The event was organised in a very short time, and so required the collaboration of a number of people (among them: Rena Dunne, Lynda Stephenson and Sheila Taylor). To all who helped with the preparations, cleaning, selling of raffle tickets, etc, we express out thanks.